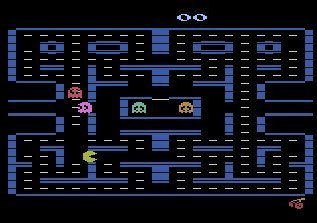 From the description by Dennis Debro:

Pacman 4K started out as a challenge for me to see if I could get a no frills Pac-man written for the 2600 in 4K and stay faithful to the original arcade game. I made some sacrifices along the way. Most noticeable was the decision to flicker the objects at a rate of 20Hz instead of developing a variable flicker algorithm.

I did some work in this direction but found that it took up too much ROM to include the other features.

Ebivision did a 4K Pac-man back in 1999. You can see pictures of their work here and short video clips of it running while at the 1999 Classic Gaming Expo here. I commend them for their work as this was a basis for my maze layout. They were able to do their game without using any undocumented 6502 opcodes. I used undocumented opcodes to reduce ROM and to help in kernel timing. Hats off to you Ebivision!

You will find that each monster has its own behavior. They are similar to the arcade version except for Clyde's. His behavior was sacrificed to get the game into 4K. Instead he moves randomly through the maze which makes for an interesting game.

Be careful when the pitch of the siren changes. When this happens Blinky will go into "Cruise Elroy" mode. While in this mode he moves a bit faster than the other monsters and also keeps a lookout for Pac-man.